Because of you, Carlos survived

In February, Carlos Yanza Salinas, 45, had his annual physical. All the routine tests were normal, and his doctor told him he didn’t have a thing to worry about. JUST A FEW WEEKS LATER, he was on a ventilator, fighting for his life.

When he started feeling sick, Carlos knew it was something different. “It was like nothing I ever had before,” he says. “It was the worst ever.”

Guessing he might have COVID-19, Carlos got tested. Connie, his wife, cared for him at home, doing her best to isolate him from their four daughters while they waited for the test results.

But his fever remained stubbornly high and he began experiencing hallucinations. After a frightening night, when Carlos collapsed on the bathroom floor and couldn’t get back up, Connie rushed him to the Emergency Department at YNHH. She had to leave him at the entrance, because she wasn’t allowed inside due to COVID safety restrictions.

Three hours later, Carlos’s doctors were preparing to induce a coma and place him on a ventilator. Carlos sent Connie one last photo, showing himself hooked up to supplemental oxygen.

That was the last she heard from him for more than four weeks. 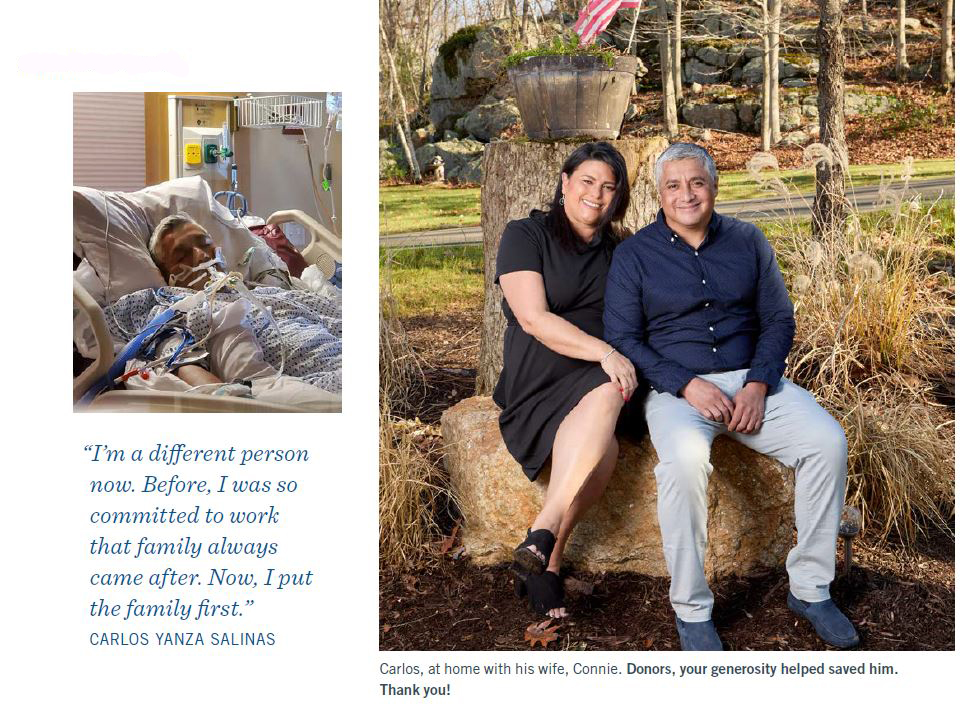 For 30 days, his life hung in the balance

When Carlos thinks back to that time, when the ventilator was breathing for him, all he recalls are strange dreams. “I had all these out-of-body experiences,” he says. “I was in a lost city with no people. I dreamed of my family coming in and out. I was always going — like I didn’t want to stay put in one place.”

For Connie and her four daughters, those 30 days were more like a nightmare. She couldn’t see her husband due to COVID visitor restrictions. They waited for a daily call from Carlos’s doctors, hoping and pr aying for good news.
Carlos got worse before he got better. Connie remembers her daughter’s 19th birthday — April 4 — as one of the worst days. The doctor called to say he wasn’t sure whether Carlos was going to make it.

“It was unbelievable, impossible to describe,” she remembers. “They put the phone to his ear and we all said what we had to say.”

But Carlos fought hard. And his doctors fought hard for him, too. They tried every promising treatment that emerged in those early days, including administering steroids to combat the infection and “proning” — when a team of caregivers carefully places the patient on his belly to improve oxygenation.
Carlos came off the ventilator after 30 days. He spent another 20 days in the hospital before being discharged to an acute rehab center, where he spent 19 more days.

Finally, after months of longing to hug his wife and daughter, Carlos came home, 71 days after he was first admitted to the hospital. “The day I came home was the happiest day of my life,” Carlos says.

“The amazing doctors and nurses I had at the hospital made all the difference,” he says. “They tried everything new to keep me alive. I will never be through thanking them for their kindness.”

Carlos is back at work, managing the home improvement and remodeling company he and Connie own. But he’s not able to do the physically demanding parts of his job anymore.

He has a long list of debilitating, lingering symptoms. “My throat and muscles hurt and my joints are very painful,” he says. “I’m always tired. I don’t want to get up, but I have to, in order to provide for my kids. That’s what keeps me going.”

Carlos still visits the hospital regularly as an outpatient at the Post-COVID-19 Recovery clinic — a specialty clinic set up during the pandemic to help patients like him, whose COVID symptoms have not gone away long after their infection is gone. (See the story on page 6 to learn more about the clinic.)

“I feel so much better when I go see Dr. Lutchmansingh at the clinic,” he says. “I know she’s going to help me get through all these after-effects.” Fortunately, most of us can’t begin to imagine what it’s been like for Carlos and his family. And he’s one of the lucky ones.