What a difference a year makes!

Last year, Erin barely had the strength to cheer for riders from her wheel chair. This year she rode 25 miles in Closer to Free Ride.

September 9, 2017: After her double mastectomy, Erin Matthews had to remain at Smilow Cancer Hospital longer than she expected. She’d managed to stay strong and upbeat through her frightening cancer diagnosis, 16 weeks of chemotherapy, and the prospect of surgery. But when she found herself stuck in the hospital for two extra weeks due to surgical complications—more precious time away from her two sons—she began to struggle with despair.

She was confined to a wheel chair and couldn’t breathe without the help of a suction machine. Even so, her doctor urged her to go down to the sidewalk outside the hospital and cheer for the Closer to Free riders during the Smilow Salute, a hallmark of the ride each year.

She didn’t know much about Closer to Free. So she was amazed when she saw more than 1,700 people riding their bikes past patients outside Smilow Cancer Hospital with greetings, good wishes, and an outpouring of hope and love.

“It was as important a part of my recovery as any medicine or surgery,” she remembers. “There were hundreds and hundreds of people out there, and I felt they were riding for me so I could get better, lifting me up in that moment when I couldn’t even breathe on my own.”

Sitting in her wheelchair, she vowed that she would do the same for the next patient who needed lifting up.

September 8, 2018: This year, she traded that wheelchair for a bike. 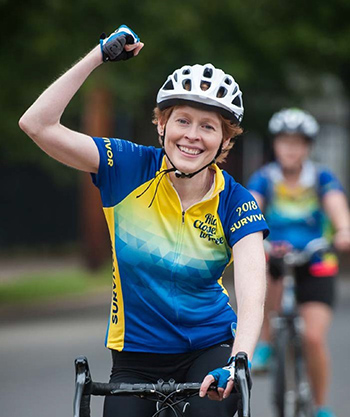 Each year before the Ride begins, an especially inspiring rider/cancer survivor is honored as the recipient of the Closer to Free bike—a symbol of strength and courage that is signed by riders and displayed in the lobby of Smilow during the following year.

This year, that bike went to Erin. She held the bike and raised her fist with enthusiasm and determination as her two boys smiled up at her and the crowd cheered. Then Erin and her sons hopped on their bikes and rode 25 miles for Closer to Free.

“Like every rider, I was in tears as I rode by the patients outside Smilow,” she says. “That’s what’s so special about Closer to Free. You’re doing it for the patients and they’re right there. It becomes such an important part of their life and their survival. It gives them a moment of strength, despite whatever they’re going through.”

Erin and her boys are already signed up for next year’s Ride—and they would love to see you there, too!

Register to ride! Join us at the 2019 Launch Event on March 7 at Stony Creek Brewery in Branford, 5–8 PM.